We've had a animation exporting issue on Unity5.3 before, but it's fixed with Skele 1.9.2f2,

Could you have a check that if you're using the latest Skele package?

if it's not the case, please give me some more details (Unity & Skele version), then we will investigate further and fix it.

Nope. The next main update would be refactoring the UI of the "Skeletion Animation system", in order to improve the usability.

I'll close this ticket for now and open it when we start to work on this one.

Glad to know you solved it :)

If you ever encounter other problems or have suggestions, just tell me

Thanks for your feedback :)

It seems a name-collision with .net's System.Console, there must be another class named "Console" in global namespace in your old project.

There're multiple possible solutions, you could choose the one fit your case.

1. Put it in its own namespace or rename the "Console" class, if this class is made by yourself;

2. If the Console class is from another plugin, you'd better notify the author to move the class to its own namespace;

3. You could workaround this, by comment/delete all the lines reporting errors.

Tell me if you still have trouble make it work,

I think I get your idea,

You mean the motor to be specific functions for the Transforms, and could expose the control variables to Animation timeline for keyframes, like the 'oscillation speed'.

I like the ideas, it would improve the efficiency of developers.

I would see if I can do something with it. :)

I think constraint shares the same concept in some degrees.

Thanks a ton for your feedback :D

Thanks for your feedback :)

Sorry for late reply, I missed the previous reply notice.

I pretty like Creature's solution for 2D animation, some assets in AssetStore has done something similar, but not as complete and sophisticated as this one.

back to the motor part,

As for the FK motor, it has several properties, which are a subset of Transform component.

As for the IK motor, the properties are IK target.

The FK motor is no different than Transform component in 2D space;

The IK motor is a IK solver, according to its description, it might be the triangulation IK; the smooth IK might be using CCD IK; The two IK algorithms are equipped in Skele, and can be used in runtime.

The Bend Physics motor, it seems easier to setup than Physics, but might not be as versatile.

I've seen several projects trying to bring physics calculation to editor, but have not found something really satisfying though.

I think some of the other motors might look more useful, like "move bounce", "leg", "path". I would consider adding some helpers alike later.

As for "leg" & "path", we've already equipped something alike: (two gifs, could take some time to load)

And the walking demo:

Thanks for the feedback, :)

I just took a look at the document, I thought "Motor" means the Physx joint's motor, but it seems that their "Motors" is a term more like Unity's MonoBehaviour;

"A Motor is simply a component that executes a certain type of behavior on a group of bones or a region mesh. Different types of Motors perform different operations."

As for the bone part, Of course we have FK & IK, and we've mesh-manipulator for making vertex-animation.

However we cannot do Physx in editor as Unity doesn't support it.

This "creature" tool looks quite interesting for 2D-anim. So, Could you tell me which feature do you mostly wish that Skele to have too?

Can this be used to animate 2D?​
7 years ago

Can this be used to animate 2D?​

Thanks for your feedback,

The short answer is Yes & No,

It can be done, but the workflow is non-optimized, so I don't recommend to use it with 2D elements for now.

The full answer is on Forum thread: 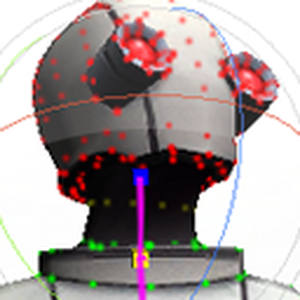